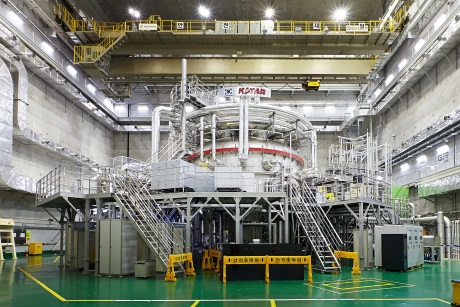 The Korean Superconducting Tokamak Advanced Research (KSTAR) tokamak-type nuclear fusion reactor has achieved a world record of 70 seconds in high-performance plasma operation, South Korea's National Fusion Research Institute (NFRI) has announced. The institute, based at Daejeon, 160 km south of Seoul, said a fully non-inductive operation mode - called a "high poloidal beta scenario" - has been used to achieve this long and steady state of operation using high-power neutral beam. It said various techniques, including a rotating 3D field, have been applied to alleviate the accumulated heat fluxes on the plasma-facing components.

"The world record for high-performance plasma for more than a minute demonstrated that the KSTAR is the forefront in steady-state plasma operation technology in a superconducting device," NFRI said in a statement today. "This is a huge step forward for realization of the fusion reactor."

In addition, the institute said, KSTAR researchers also succeeded in achieving an alternative advanced plasma operation mode with the internal transport barrier (ITB). This is a steep pressure gradient in the core of the plasmas due to the enhanced core plasma confinement. NFRI said this is the first ITB operation achieved in the superconducting device at the lowest heating power.

"With the progress of the Iter project, the KSTAR research will focus on the mission essential for the fusion reactor beyond Iter," the institute said. "They are new efficient mode of operation and a new divertor concept suitable for the Korean fusion demonstration reactor, the K-DEMO device, which will be the first runner in worldwide fusion energy development plan."

Construction of KSTAR, a tokamak-typed nuclear fusion reactor, began in December 1995 and it was completed in August 2007. The first experiment was conducted in KSTAR in 2009. It was the first in the world to feature a fully superconducting magnet system with a central solenoid, toroidal and poloidal field coils. It measures 8.6 m high, and 8.8 m in diameter.

Tokomak-design reactors like KSTAR use magnetism to contain a toroidal-shaped plasma at temperatures of up to 300 million °C. Despite this temperature it is necessary to cool superconducting magnets to -269°C. Inside the plasma, a few grams of deuterium and tritium atoms are stripped to the nuclei, which fuse to release energy. It is hoped that this form of nuclear energy could one day be used to generate electricity, but maintaining a steady plasma has proven very difficult.