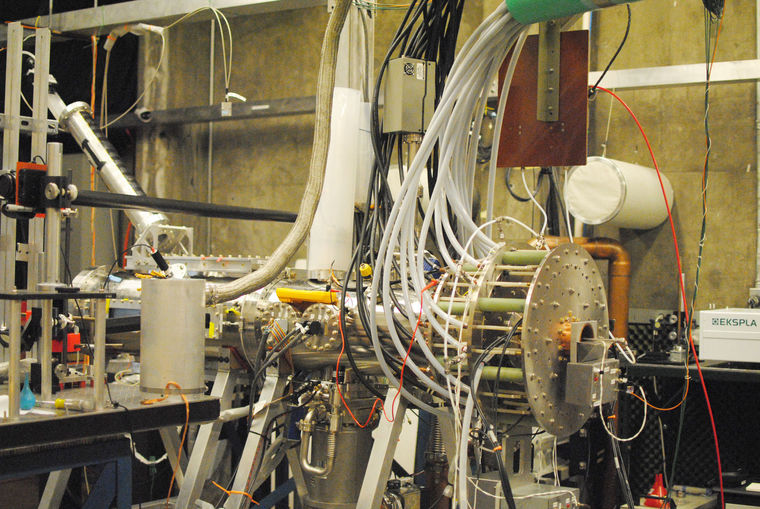 Sustainable nuclear fusion has long been a dream for most scientists and energy experts alike. Clean, abundant, and economical, there have been many attempts to make it workable. Now, researchers at the University of Washington have stepped up their existing involvement in the fusion field with a $5.3 million Department of Energy grant to scale up their “Sheared Flow Stabilized Z-Pinch” fusion device.

Uri Shumlak, a professor in the department of aeronautics and astronautics, co-leads the project and explained that the Z-Pinch technique is smaller and cheaper than more conventional magnetic field coil-driven reactors. “The large size of the magnetic field coils drives up the cost,” he said. “In Z-Pinch, the plasma column is quite small. In order to get fusion, you scale up in the opposite direction, and get smaller.”

The small size and relative inexpensiveness helps in its possible applications, which can be both terrestrial and celestial. “The real interest of mine is in space propulsion,” he said. “Because it is a linear device, it fits better into a spacecraft.”

Michal Hughes, a fifth-year graduate student who has been working in the Z-Pinch lab, elaborates on the uses of the technique. “We can use this device both as a power plant and as propulsion,” he said. “That makes it easier to fly the mission and is potentially much more powerful than solar panels.”

However, there are problems to be overcome, chiefly the instability of the plasma. “The real challenge has been to find a configuration that is stable,” Shumlak said.

The team plans to build a new Z-Pinch device, which will be ready by summer 2016. It will be the third machine they’re building. “We built three machines,” said Elliot Claveau, a graduate student in aeronautics and astronautics who joined the lab in 2014. “The first was 16 years ago. Last year, we got the second machine.” He said the third machine will be 10 times as powerful as the present one and the lab will be running two machines at the same time.

This more powerful machine will be useful in giving the researchers a better understanding of what they’re studying. “For the second machine, we went past a million degrees,” Hughes said. “For the third machine, we’re looking to reach even higher temperatures, which will help us investigate different responses of the plasma.”

There have been a number of graduate and undergraduate students who have worked in the lab, including Hughes, who has been involved for six years. Shumlak is appreciative of the students’ contribution to the project. “This research has been made possible by dedicated undergraduate and graduate students,” he said. “There have been many students who’ve made significant contributions.”

The professor and the students are cautiously optimistic about the prospects of the research and its potential massive impact. “If everything turns out as expected, we should be able to get to a viable fusion reactor ready for commercial scale in 10-15 years,” Shumlak said.

The students are less reserved about the potential of the project. “The goal we have is the advancement of this field in general, because eventually if everything succeeds, the research is the first step in developing a cheap fusion reactor,” Claveau said. “This is potentially world changing, but we’re not there yet.”

Source: The Daily of the University of Washington