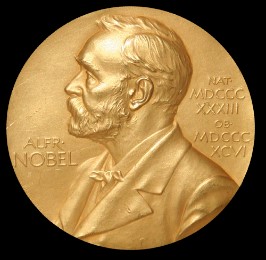 The Nobel Prize in Physics 2017 was divided, one half awarded to Rainer Weiss, the other half jointly to Barry C. Barish and Kip S. Thorne "for decisive contributions to the LIGO detector and the observation of gravitational waves".

On 14 September 2015, the LIGO detectors in the USA saw space vibrate with gravitational waves for the very first time. Although the signal was extremely weak when it reached Earth, it is already promising a revolution in astrophysics. Gravitational waves are an entirely new way of following the most violent events in space and testing the limits of our knowledge. The gravitational waves that have now been observed were created in a ferocious collision between two black holes, more than a thousand million years ago. Albert Einstein was right again. A century had passed since gravitational waves were predicted by his general theory of relativity, but he had always been doubtful whether they could ever be captured.

LIGO, the Laser Interferometer Gravitational-Wave Observatory, is a collaborative project with over one thousand researchers from more than twenty countries. Together, they have realised a vision that is almost fifty years old. The 2017 Nobel Laureates have, with their enthusiasm and determination, each been invaluable to the success of LIGO. Pioneers Rainer Weiss and Kip S. Thorne, together with Barry C. Barish, the scientist and leader who brought the project to completion, have ensured that more than four decades of effort led to gravitational waves finally being observed.

Rumours began to circulate around five months before the international research group had finished refining its calculations, but they did not dare to announce their findings until 11 February 2016. The LIGO researchers set several records with their very first discovery; besides the first ever observation of gravitational waves, the entire course of events was the first indication that space contains medium-sized black holes of between 30 and 60 solar masses and that they can merge. For a short moment, the gravitational radiation from the colliding black holes was many times stronger than the collected light of all the stars in the visible universe.