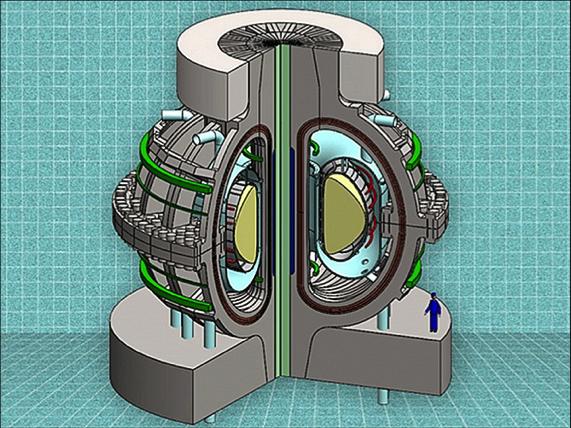 A typical measure of fusion plasma performance is called "plasma beta," which is the ratio of plasma pressure to magnetic field pressure. Achieving a very high beta--generating the required plasma pressure with low magnetic field--could help reduce the cost of the superconducting magnets used in a fusion reactor. For this reason, many visions of fusion reactors try to maximize plasma beta at moderate magnetic field strengths. Operation at higher beta, however, pushes the plasma up against many performance limits, making plasma stability a tricky business.

But plasma beta is not the only consideration. Another ratio, the size of the confined plasma compared to the ion gyroradius, also determines overall energy confinement and dictates plasma performance. (The ion gyroradius is the helical path ions are forced to follow in the magnetic field.) Increasing magnetic field strength decreases the ion gyroradius, which allows a reduction in the size of the fusion device with no loss of performance. This approach also lowers beta and the plasma operates farther away from stability limits, in a "safe zone."

While scientists have explored both of these paths to improving performance, the recent development of the so-called "high-temperature superconductors" opens a window for much higher magnetic fields, as the critical currents do not degrade rapidly, even at magnetic field values of 30 Tesla or higher. So these should really be called high-temperature, high-magnetic-field superconductors.

For tokamak design, the field strength limits are primarily determined by the maximum allowable stresses in the structural components holding the magnet together, and not by the intrinsic limits of the superconductors.

Even the most aggressive tokamak designs with conventional superconductor technology are limited to about 6 Tesla on-axis toroidal magnetic fields. By nearly doubling magnetic field strength, to about 10 Tesla on-axis, conceptual designs indicate that a tokamak approximately the physical size of the world's largest currently operating tokamak, JET, would be capable of producing 500 MW of fusion power, and even net electricity (Figure 1). High-temperature, high-magnetic-field superconductors can also make it possible to incorporate jointed magnetic coils into the reactor design, dramatically improving flexibility, and ultimately, maintainability for reactor systems.

While several physics and technology challenges remain to be solved, the world-wide experience from tokamak experiments provides the basis to support a new path of exploration into compact, power producing reactors using the newly available high-temperature, high-magnetic-field superconducting technology.