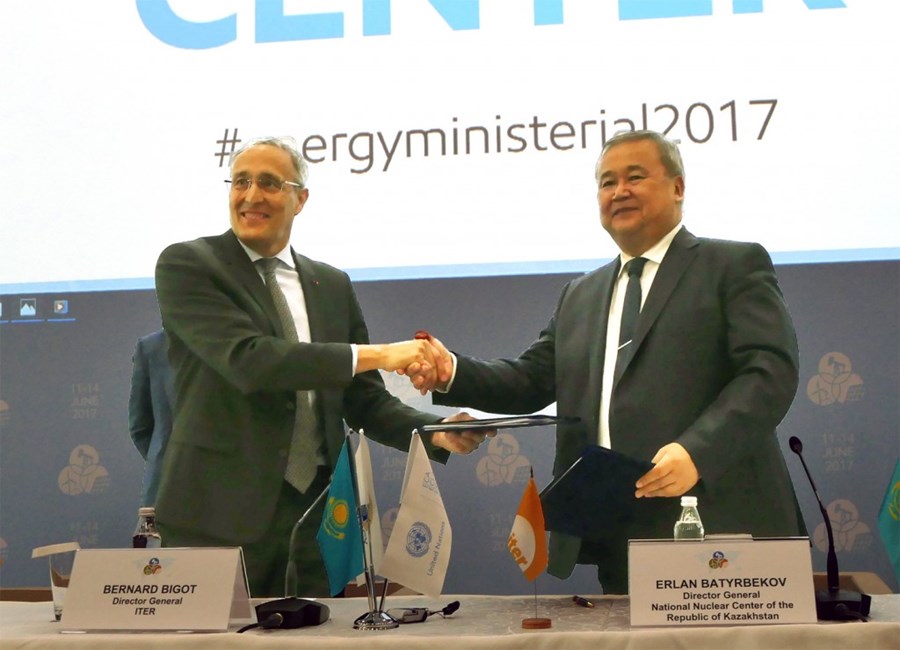 The ITER Organization has officially welcomed the National Nuclear Center of the Republic of Kazakhstan (NNC-RK) as a new technical collaborator.

On Sunday 11 June, a Cooperation Agreement was signed by ITER Director-General Bernard Bigot and the director of Kazakhstan's National Nuclear Center, Erlan Batyrbekov, calling for scientific and engineering cooperation between the two institutions. Agreement scope includes the technical exchange of experts, access to Kazakhstan's KTM tokamak for materials testing, and the development of diagnostics for ITER.

Kazakhstan also has an abundance of mineral resources that are of interest to ITER, some of which—like beryllium—are of great relevance to the project.

"We are very thankful to add today a new collaboration partner to the ITER Project," said Bernard Bigot. "It is a unique opportunity, enabling us to perform detailed material studies at the recently inaugurated KTM tokamak."

The Agreement was signed on the second day of the 2017 World's Fair, which is taking place in Astana, Kazakhstan.

The signing ceremony was incorporated into the Ministerial Conference on Securing Sustainable Energy Development, held before a large gathering of delegates and media representatives at the EXPO Congress Center. It was attended by the Vice-Minister of Energy of the Republic of Kazakhstan, Bakhytzhan Dzhaksaliev; the French Ambassador to Kazakhstan, Francis Etienne; the US Ambassador in Astana, George A. Krol; and the Ambassador of India, Shri Harsh Kumar Jain.


The Kazakhstan Tokamak for Materials testing (KTM) is based at the National Nuclear Center in the city of Kurchatov, in the eastern part of the country. With a vacuum vessel volume of 12.3 cubic metres (compared to ITER's 840 cubic metres), the KTM is smaller and differently shaped than the ITER Tokamak. Copper poloidal and toroidal field coils and a central solenoid wound with copper and silver alloy conductors provide the magnetic "cage" of the device.
The design of the divertor is one of the smaller machine's striking features. KTM's divertor consists of plasma-facing plates mounted on a rotary table—the plates can be replaced without venting the vacuum vessel by way of the table's rotating and vertical movements. This capability, along with other assembly-disassembly systems, is immensely advantageous for a machine that is intended to test plasma-facing materials under powerful particle and heat flux. It enables operators to remove and exchange components in a relatively short time.

The Cooperation Agreement with the National Nuclear Center of the Republic of Kazakhstan is only the second time that the ITER Organization has established technical collaboration with a non-Member institution. (The first example is the Cooperation Agreement signed with ANSTO, the Australian Nuclear Science and Technology Organisation, in October 2016.)
Source: ITER
Share in Reddit
powered by social2s