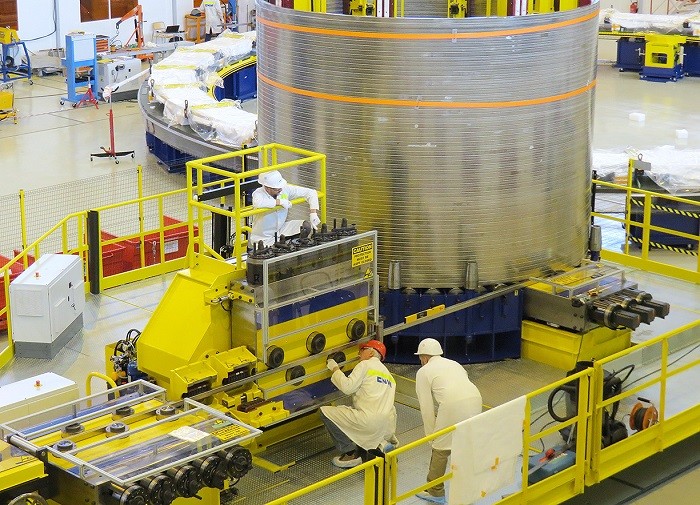 The team of engineers from F4E, ASG and CNIM, working in Europe’s industrial facility on the ITER site, and their colleagues in ASIPP, the Institute of Plasma Physics of China’s Academy of Sciences, have officially started manufacturing the Poloidal Field (PF) coils assigned to Europe for the biggest fusion device –ITER. ITER will operate with six PF coils. Europe is responsible for five of them and through a collaboration agreement with China one will be fabricated in ASIIP. The remaining coil will be delivered by Russia.

After having successfully completed the winding tests using lengths of dummy conductor, the technicians have started unspooling the “real” conductor and inserted it in the machines to produce the impressive magnetic rings that will control the shape and stability of the super-hot plasma.

In ASIPP, the winding of the first Double Pancake (DP), which consists of two layers of conductors wound in the shape of massive pancakes, started in mid-March and has been completed. Works on the two Helium inlets at the inner joggles, from where Helium will circulate in the conductor to lower its temperature to freezing levels so as to make the coil superconductive, have been concluded. Carefully milling a hole in the jacket, without damaging the superconducting strand underneath, and welding a pipe to feed the helium into the conductor, have been some of the additional delicate works that needed to be performed. This weld has then been X-Rayed and leak tested to ensure that no Helium can escape through the weld. Subsequently, the Helium inlet insulation has then been wrapped around the inlet. On average, the winding of a DP is expected to take 4-5 weeks each.

After a series of rigorous dimensional checks, in order to check whether the shape and dimensions of the component are in compliance, the component will be transferred to the terminal assembly area. The DP will enter its final stage of fabrication by going through Vacuum Pressure Impregnation, where the necessary vacuum will be created to inject the epoxy resin and cure the insulation.

Meanwhile, a few weeks ago in F4E’s PF coils facility, CNIM has already started winding the conductor of the fifth PF coil and the first DP is expected to be completed by the end of May. When the first layers will be completed, the team of technicians will proceed with the installation of the Helium inlets and perform the same steps as in ASIPP.

The good collaboration between F4E, ASIPP and their industrial partners, has been fundamentally important in making good progress in a co-ordinated way. The engineers and technicians supervising the works are witnessing the moment they have all been waiting for: the winding tests are over and the coils are being manufactured for real!