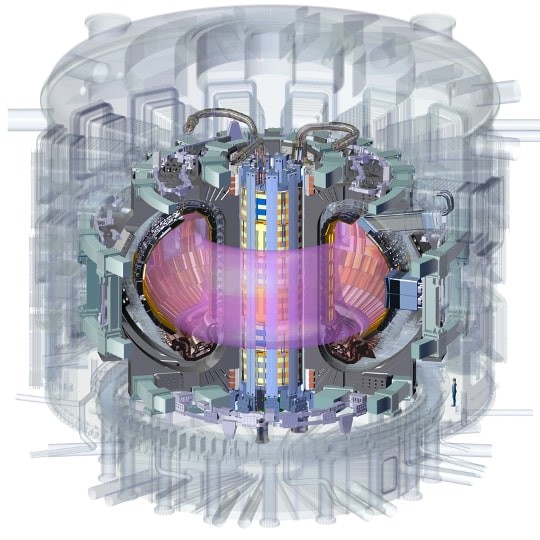 At the end of July 2020, an official ceremony was held in France to inaugurate the assembly of the ITER tokamak. After 14 years of signing the agreement in Paris for the construction and operation of a next-generation fusion experimental reactor, the ITER project has entered its decisive phase.

The event, which is an important step towards confining fusion as a source of energy, drew extensive media attention from all over the world.

Director of the Institute of Plasma Physics and Laser Microfusion, Prof. Andrzej Gałkowski and Prof. Monika Kubkowska, head of the national consortium dealing with fusion, joined the "Eureka" radio programme on Jedynka station. The guests explained to the audience, among others, what difficulties are involved in recreating the reactions taking place inside the Sun under terrestrial conditions and why, among all possible reactions, the synthesis of deuterium and tritium - two isotopes of hydrogen - was chosen as a source of energy for future fusion power plants.

The Institute of Plasma Physics and Laser Microfusion, the coordinator of fusion research in Poland, as part of the national scientific and industrial center New Energy Technologies (CeNTE), performs research related to the ITER project.

Link to the radio programme (in Polish): www.polskieradio.pl

The participants of the ITER project are: European Union, Japan, USA, Russia, China, India and South Korea. Seven partners chose ITER to be located in Cadarache, a small town in the south of France, near Aix-en-Provence.

ITER will be the next step on the way to confine the new source of the released energy of light nuclei fusion. The reactor is meant to generate more than 500 MW of fusion energy, with the main goal to finally demonstrate the possibility to generate electricity thanks to fusion reactions. The aim of the project is to show the scientific and technical feasibility of nuclear fusion as the basis of fusion energy.

An extremely important issue on a global scale is to provide people with a stable source of energy. It is possible that nuclear fusion will provide a sufficiently large amount of usable energy (practically infinite), while remaining a safe source, available at any point on the globe and not causing the emission of hazardous gases into the atmosphere.

Only one question remains to be answered: when will we be able to develop the technology allowing to obtain electrical energy from fusion on an industrial scale, and when fusion energy will be economically profitable. Professor Andrzej Gałkowski answers this question quoting Lev Arcymowicz, one of the pioneers of nuclear fusion research: "Exactly when humanity will need it". The time is coming.