Visit of the EUROfusion manager to Poland 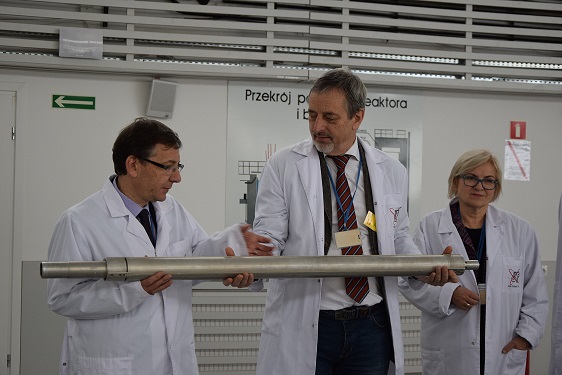 Tony Donné – the managing director of the EUROfusion Consortium with his deputy Xavier Litaudon visited a few Polish institutions that take part in European research on thermonuclear energy. The aim of two-days long visit was to present Polish scientific achievements and contribution into the development of nuclear fusion.

On the first day the guests visited the Sylwester Kaliski Institute of Plasma Physics and Laser Microfusion and had a chance to participate in the meeting with the members of the national association of the scientific-and industrial centre New Energy Technologies (CeNTE). The meeting was opened by the IPPLM Director Andrzej Gałkowski who introduced the representatives of various units with an aim to present his scientific profile. The EUROfusion manager got familiar with the works of the following units: the Warsaw University of Technology, the National Center for Nuclear Research, the West Pomeranian University of Technology, the PAN Institute of Nuclear Physics, the Poznan Supercomputing and Networking Center, the Wrocław Technology Park along with the representatives of the industrial company ELEKTROBUDOWA S.A. The all-day meeting ended with visiting the laboratories of the Institute of Plasma Physics and Laser Microfusion.

During the second day of the visit Tony Donné and Xavier Litaudon visited the laboratories of the National Center for Nuclear Research (NCBJ) in Świerk and Warsaw University of Technology. The manager of NCBJ Krzysztof Kurek invited the visitors to see nuclear power reactor Maria constructed in 1974, plasma-focus device PF360, Cherenkov detectors and IBIS II device. In turn, scientists of the Warsaw University of Technology showed him around the labs of Department of Materials Science and Engineering and Department of Electronics and Information Technology.

The visit of the EUROfusion manager Tony Donné took place on 1st and 2nd December 2016.

EUROfusion consortium is the European Association for the Development of Nuclear Energy, gathering research institutions from 27 European countries, including also the associated Switzerland. Additionally, in 2016 some negotiations started to support joining the Ukrainian countries to that group.