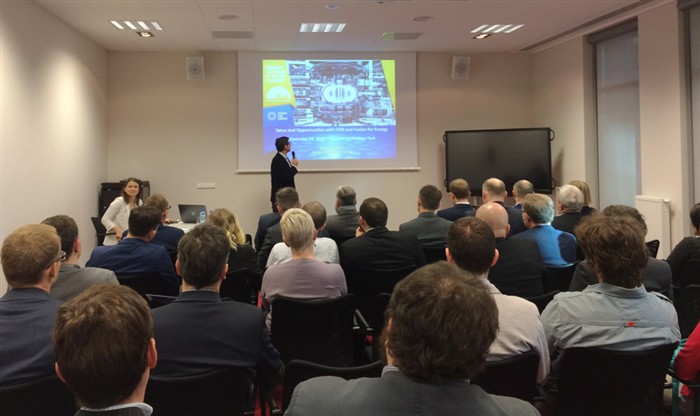 TER will count with more than one million components which to a great extent will be bespoke. This said, the transfer of existing technology towards their design and development will give companies a creative level playing field. With this thought in mind Maciej Potocki, the President of the Wrocław Technology Park, and Sylwia Wójtowicz, the F4E Industry Liaison Officer for Poland organised an Info Day highlighting the business opportunities in international projects. The focus was on ITER, introducing the entrepreneurial angles of the biggest fusion project, and future collaboration between Poland’s Space Agency and the European Space Agency (ESA).

The event brought together almost 50 representatives from 35 companies specialised in cutting edge technology with a proven track record in R&D. SMEs, managed by young and dynamic innovators, based at Wrocław Technology Park, which has become an incubator for talent in applied research, were present and actively involved. Four companies were given the opportunity to present the pioneering work they do. Missions to Mars, space infrastructure, extraction of materials and robotics are some of the areas they have been working in and much of their expertise can be recycled in ITER. How? Think of cameras, sensors and robotics in the field of Remote Handling, or even Cryogenics and Diagnostics. Benjamin Perier, F4E Market Intelligence Group, attended the event and offered a forecast of the tenders until 2020. His presentation created an appetite for further information which was given during the business to business meetings which followed.

The participants were encouraged to register on F4E’s Industry and Fusion Laboratories portal so as to stay informed of future calls, and on-going contracts, in case they wish to liaise with F4E and its suppliers. Last, but not least, they were informed of the forthcoming ITER Business Forum taking place on 28-30 March in Avignon, France.

TER will count with more than one million components which to a great extent will be bespoke. This said, the transfer of existing technology towards their design and development will...

The Monaco International ITER Fusion Energy Days (MIIFED) gather representatives from the seven parties of the biggest energy collaboration, together with multiple companies and laboratories currently involved. Those flirting with...

Johannes Schwemmer has taken up duties as Fusion for Energy’s (F4E) Director. Revamping Europe’s contribution to ITER will be his main priority which will underpin most of the actions that...

The Governing Board of Fusion for Energy (F4E) has decided to appoint Dr Pietro Barabaschi as Acting Director of F4E with effect from 1 March 2015 until a new Director...

Reaching out to key stakeholders is one of F4E’s key objectives. “We ought to listen, understand and evaluate the different suggestions regarding Europe’s contribution to ITER, and the challenging path...

How to Submit a Tender to F4E?

Get ready for the Fusion for Energy Forum!

Get ready for the Fusion for Energy Forum! The biggest business meeting point for industry, SMEs and European fusion laboratories is coming to Barcelona, 10-12 June 2015. • Find out more about the...