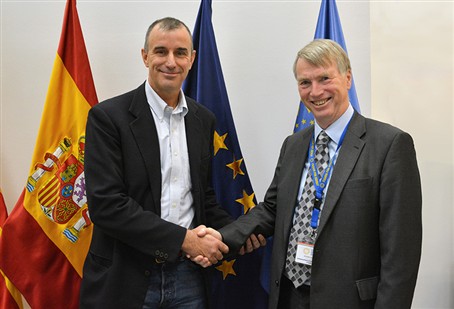 The Governing Board of Fusion for Energy (F4E) has decided to appoint Dr Pietro Barabaschi as Acting Director of F4E with effect from 1 March 2015 until a new Director takes up duties. The Governing Board (GB) has also agreed to initiate the process to recruit a new Director.
Dr Barabaschi will replace the outgoing Director, Professor Henrik Bindslev, who will leave F4E on 28 February 2015. Professor Bindslev has been appointed Dean of the Faculty of Engineering at the University of Southern Denmark. The Chair of the GB, Mr Stuart Ward, expressed, on behalf of its members, his gratitude to Professor Henrik Bindslev for the vision and leadership that he has demonstrated as the Director of F4E which manages Europe’s contribution to the ITER International Fusion Energy Project and the Broader Approach projects with Japan.
Dr Barabaschi has been Head of F4E’s Broader Fusion Development Department at Garching, Germany, since 2008. An electrical engineer, he started his career in the JET Project. In 1992 he joined the ITER Joint Central Team in San Diego and by 2006 he was the Deputy to the Project Leader as well as Head of the Design Integration Division of the ITER International Team at Garching.

TER will count with more than one million components which to a great extent will be bespoke. This said, the transfer of existing technology towards their design and development will...

The Monaco International ITER Fusion Energy Days (MIIFED) gather representatives from the seven parties of the biggest energy collaboration, together with multiple companies and laboratories currently involved. Those flirting with...

Johannes Schwemmer has taken up duties as Fusion for Energy’s (F4E) Director. Revamping Europe’s contribution to ITER will be his main priority which will underpin most of the actions that...

The Governing Board of Fusion for Energy (F4E) has decided to appoint Dr Pietro Barabaschi as Acting Director of F4E with effect from 1 March 2015 until a new Director...

Reaching out to key stakeholders is one of F4E’s key objectives. “We ought to listen, understand and evaluate the different suggestions regarding Europe’s contribution to ITER, and the challenging path...

How to Submit a Tender to F4E?

Get ready for the Fusion for Energy Forum!

Get ready for the Fusion for Energy Forum! The biggest business meeting point for industry, SMEs and European fusion laboratories is coming to Barcelona, 10-12 June 2015. • Find out more about the...