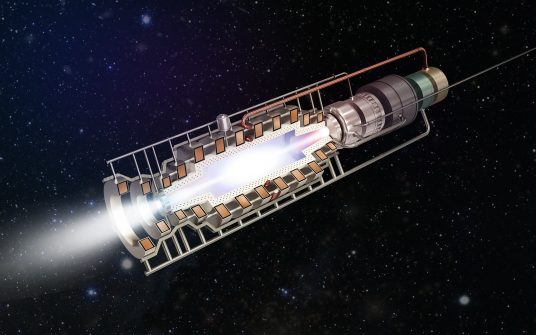 Nuclear fusion is the process that powers the sun, but closer to home scientists are trying to develop fusion reactors that could provide immense amounts of energy. These reactors are big and (currently) inefficient, but a NASA-funded startup called Princeton Satellite Systems is working on a small-scale fusion reactor that could power advanced fusion rockets. Suddenly, other planets and even other star systems could be in reach.

All the forms of rocket propulsion we currently have involve accelerating propellant out of a nozzle. Then, physics takes over and the vessel moves in the opposite direction. Most spacecraft use chemical propulsion, which provides a large amount of thrust over a relatively short period of time. Some missions have been equipped with ion drives, which use electrical currents to accelerate propellant. These engines are very efficient, but they have low thrust and require a lot of power. A fusion rocket might offer the best mix of capabilities.

Current nuclear reactors use fission to generate energy; large atomic nuclei are broken apart and some of that mass is transformed into energy. Fusion is the opposite. Small atomic nuclei are fused together, causing some mass to be converted into energy. This is what powers stars, but we’ve had trouble producing the necessary temperatures and pressure on Earth to get net positive energy generation.

The goal is to generate 1 kilowatt per kilogram, so a 10-megawatt reactor would weight about 10 metric tons. This provides all the power a spacecraft would need, regardless of its distance from the sun, but what about propulsion? A fusion reactor uses magnetic fields and low-frequency radio waves to compress and heat matter until it becomes plasma that can undergo fusion (Princeton Satellite Systems uses a mix of deuterium and helium-3 in its reactor). As the plasma rotates, some of it can be directed out of a nozzle, and you’ve got a high-thrust, high-efficiency engine.

Faster, more efficient rocket engines could cut the risk of radiation exposure for human explorers by getting them to their destination and home faster. It could also send probes to distant targets in a fraction of the time it currently takes. For example, a 1-megawatt fusion rocket could reach Pluto in four years, whereas it took New Horizons nine years.

There are still issues to address with Princeton Satellite Systems’ design. For one, the reactor produces dangerous radiation that requires shielding from crew and computer systems. Additionally, helium-3 is rare on Earth. The company hopes to have a working prototype reactor by 2019 or 2020. From there, the sky’s the limit.